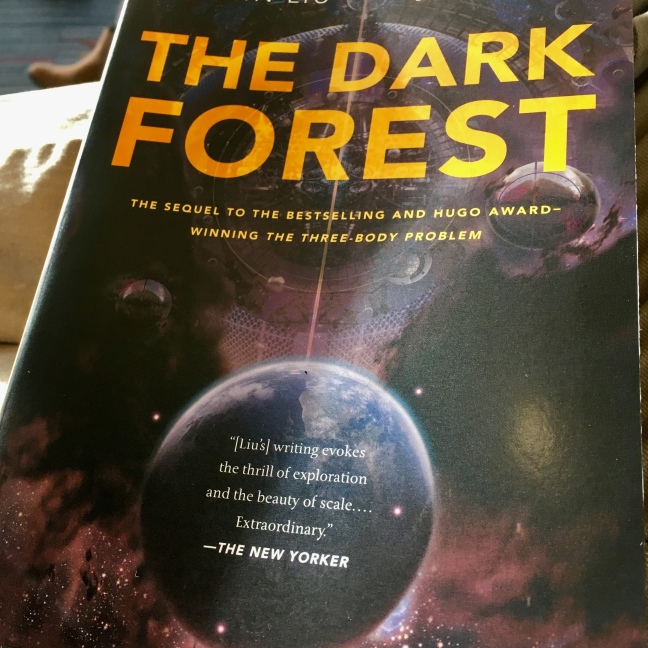 “For the majority of people, what they love exists only in the imagination. The object of their love is not the man or woman of reality, but what he or she is like in their imagination. The person in reality is just a template for their dream lover. Eventually, they find out the differences between their dream lover and the template. If they can get used to those differences, then they can be together. If not, they split up.”

The sequel to the Hugo-winning novel The Three-Body Problem picks up where the first book left off, with the world in a crisis era. A fleet from Tri-Solaris, a technologically advanced civilization cultivating the earth for colonization, is on its way…and will arrive in a little over four hundred years. How will the human race respond to this crisis when the enemy is capable of reading and hearing everything, has put a cap on the advance of science, and no nation yet has so much as a single space ship?

The central plot of The Dark Forest is humanity’s preparation for the all-but inevitable doomsday battle.

Humanity gambles its fate on reckless plan. If the Tri-Solarians know everything said or written, then the only hope for survival is to appoint saviors empowered to come up with plans in the security of their minds. The UN appoints four men Wallfacers, named after the practice of meditation, and empowers them to appropriate resources to defend the human race––with bureaucratic oversight, of course.

Three Wallfacers are obvious choices: Frederick Tyler, a former US Defense Secretary, Manuel Rey Diaz, the president of Venezuela who defeated a US invasion, and Bill Hines, a renowned diplomat and pathbreaking neurosurgeon. For each of these the Earth-Trisolaris Organization appoints someone a “Wallbreaker,” designed to foil their efforts. But the fourth Wallspeakers is a curiosity, a failed Chinese professor named Luo Ji whose main contribution to the world outside a string of disastrously fleeting sexual liaisons is to have been an early adopter (and earlier abandoner) of “Cosmic Sociology” in a conversation with the astro-physicist Ye Wenjie.

Nobody quite understands why the UN appointed Luo Ji (least of all Luo Ji, who tries to reject the appointment), but the Tri-Solarans see him as a threat and determine to kill him before the plan he doesn’t know he is concocting foils their invasion.

Everyone else prepares, pioneering innovations to space travel and hibernation so that people can see their plans to fruition. In the years that pass, humanity survives “The Great Rift” that threatened to destroy humanity prematurely, and makes great strides in military technology, but overconfidence breeds complacency and the greatest threats are the ones they don’t know about.

The Dark Forest is not a character-driven novel in the traditional sense. As such, Cixin Liu’s characters in this series feel somewhat impersonal, though this may also stem from cultural differences. Here, at least the story engine is the tension between individual agency, the solipsistic desire for personal pleasure, and the bureaucratic structures that mitigate both––for good and for ill. The individual is the only hope for society, but the overriding impulse for most people is to take their own pleasure. Luo Ji is one protagonist, the unlikely hero and a vehicle for exploring the best and worst of human nature, his principal antagonist is humanity, which, in turn is also a protagonist faced by a combination of Tri-Solaris and itself.

Like its predecessor, The Dark Forest blends styles to explore broad philosophical questions. This installment, however, is best described as a blend of two science fiction types: the doomsday confrontation of an Orson Scott Card and the broad, galaxy-spanning scope of an Isaac Asimov or Olaf Stapledon. The combination resulted in long periods of philosophical meditation punctuated by moments of frenetic action.

I struggled a bit with remembering the characters who carried over from the first book, but that is a function of my being a native English speaker, but this was my only complication in a novel that I burned through.

Non-linear in chronology and epic in scope and fusing Chinese worldview with a philosophy that is simultaneously optimistic and pessimistic about human nature, I loved The Dark Forest and am looking forward to see how the series concludes.

I recently also finished reading Sourdough, a comic novel about a young woman who discovers bread and love, and so abandons her lucrative, soul-sucking job in tech, and will be writing about it in the next couple of days. I just started American Prometheus, a Pulitizer prize-winning biography of J. Robert Oppenheimer that I picked up on a recent trip to New Mexico.

One thought on “The Dark Forest”

This is what attending a virtual conference looks like.
“What? This is the sunny spot. No, I don’t care that you want to make the bed.”
Hello.
I plowed through David Elliot’s Bull before starting this one. It is a quick, verse retelling of the Minotaur story.
Still working on getting my perfect ear. I think throwing my shaped dough in the fridge overnight has been over-proofing the bread. I get better results proofing in the fridge for ~3–4 hours instead of 8–12.
Taking full advantage of the public library here whole I can, now with this novel based on the actually killing of a CBS journalist in 1948.