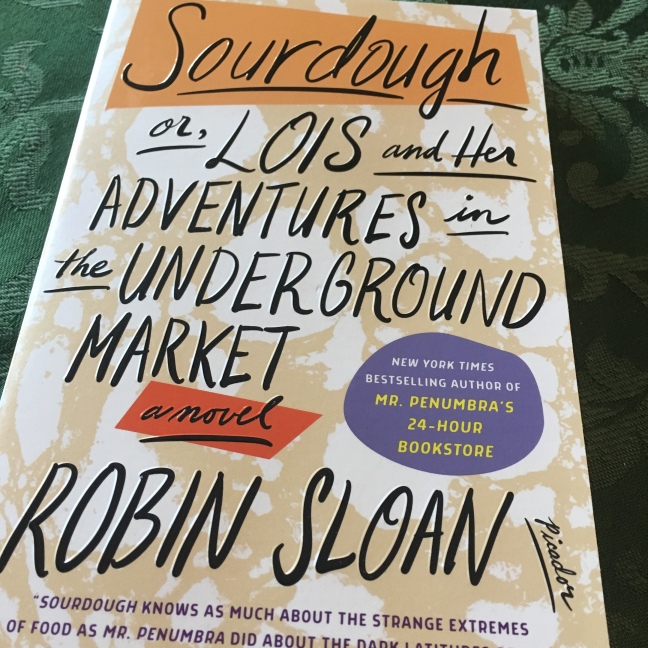 “In every wheel of cheese, there’s revolution, alliance, betrayal…Can you feel it?”

I told him the truth: I could not.

“Nope. You’re honest, I appreciate that. Of course you can’t. I couldn’t, not at first. We’re blind to it. But this is their world, not ours, and their stories are greater.”

Her job working in robotics at a company called General Dexterity in the Bay Area crushes Lois. It pays well by most standards, though less so by San Fransisco standards, but the preternaturally motivated and motivating CEO pushes his employees to finish projects related to the development of robotic arms and the cheerily obsessive corporate culture encourages them to forgo everything but work. Many people sleep in the office. One group, including Lois, takes to the latest fad diet, a grey nutritional paste called Slurry. She nearly burns out.

Then she discovers a small restaurant that delivers her two rejuvenating foods: a spicy soup and sourdough bread to sop it up with. Only two men work at the restaurant where this food is produced, the brothers Beoreg and Chaiman. The brothers are Mazg, a hidden European ethnic group with a proud culinary history (part Jewish, part Roma in structure), and when they are forced to leave San Francisco they deliver a gift to their “Number one eater”: a portion of their sourdough starter, instructions for care, and a promise to write.

Lois earned her title for a reason, ordering the same food multiple times a week. She doesn’t cook, let alone bake, but feels an obligation to the Beoreg who she has spoken to on the phone so many times, so she makes a loaf of bread. It emerges from the oven warm and delicious and with a misshapen face on its crust. So she makes more, selling some and trying out for a spot at one of the area Farmer’s Market. Before long bread-baking takes over her life and Lois finds herself ready to quit General Dexterity and try to make a living making bread, with a trusty robotic arm to help stir the dough. But like Alice entering into wonderland, Lois’ adventures have just begun.

Sourdough is a comic novel that treats three serious issues bluntly but each with a light narrative touch. Two of these appear in recurring scenes.

In the one, Lois attends the “Lois Club”, founded by her grandmother, where every Lois has a distinguishing adjective. Lois is wounded to find out that she is “boring” Lois. Bread baking changes this, giving her a distinguishing characteristic, posing the question which is more fitting: “bread” Lois or “interesting” Lois.

In the other, Lois falls in love with her Beo, the chef who won her heart through her stomach.

The third topic is tension between tradition and innovation. This is the most well-developed theme, a function of its development through the main narrative arc, both in the San Fransisco food scene and the General Dexterity corporate goals.

Sloan talks about bread and food bacteria with loving care and more than one scene features characters waxing poetic about microbiology. Moreover, he makes it clear that while Lois has potential she still knows very little about baking, and the reader is introduced to the topic through her eager and inexperienced eyes.

Despite these virtues and legitimately funny episodes, though, his treatment of Lois’ sourdough starter left me cold. This is not an ordinary starter, but a magical one that requires almost no effort to produce the most wonderful bread provided only that the baker feeds and serenades it. The peculiar traits of this starter are fundamental to the plot, meaning that it transcends a simple sense of wonder at this thing that Lois wrought (and that she did not actually work for). Instead, it provokes envy in other bakers whose own starters do not measure up, ironically undermining the otherwise loving portrait of baking bread.

Overall, I appreciated the sentiment that baking bread makes a person inherently interesting as someone who bakes bread and I understand both the catharsis and the mania that comes with baking bread. Sourdough was not among my favorite reads of the year, but it is a light, clever novel that filled a different niche than my usual fare.

I am currently making my way through American Prometheus, the Pulitzer Prize-winning biography of J. Robert Oppenheimer. I am riveted so far, though I somewhat mistrust its tendency to psychoanalyze Oppenheimer as a young man.

That feeling when you really just want another ten minutes of sleep.
Okay, you caught me. I went through the NY Times’ notable books of 2020 last week and picked up from the library anything that looked interesting from the library. The result is that my reading selection has trended more recent than usual of late.
Tonight’s sky.
What is this cat? This is him *sleeping* under my desk.
Hello. I am a turtle.
When a Muslim woman in India expresses dissatisfaction with state brutality and police incompetence after a terrorist attack on a commuter train, she finds herself accused of committing the attack. On the outside the prison, a hijra (a trans woman) might prove the key to her freedom and her former teacher stakes his place with a far-right party on proving her guilt.