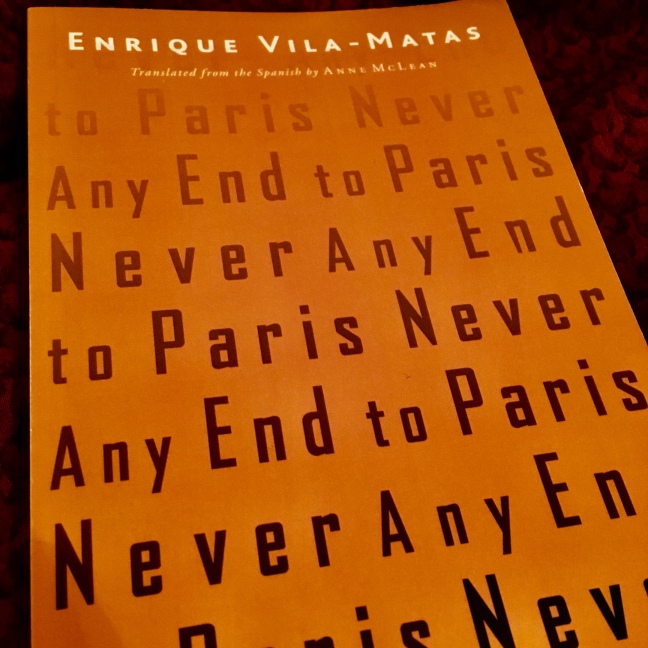 I shall never know why people write and how it is people don’t write.

When an old man fancies he looks like his idol Ernest Hemingway he must attend the Hemingway lookalike contest in Key West, Florida. When a young man idolizes Hemingway, he must go to Paris and learn to write. The narrator of Never Any End to Paris, a stand-in for Enrique Vila-Matas, does both.

Never Any End to Paris, which takes the form of a transcript of lectures delivered at a conference on irony, opens with the narrator’s ill-fated entry into the lookalike contest. The organizers disqualify him on the grounds that he doesn’t look anything like Hemingway. From there the novel unfolds in imitation of Hemingway’s retrospective of years spent in Paris, A Moveable Feast.

As a young man, the narrator moved away from his unhappy home life in Barcelona to be like his hero in Paris. He takes up a garret operated by Marguerite Duras in the hope of receiving words of literary wisdom that will launch his career. This works, but his experience was wildly divergent from Hemingway’s. Both lived in poverty and had a older female mentor amid the constellation of literary lights, but the narrator came to Paris after being a student, rather than having had some lived experience, and instead of working lived on a stipend from his father. Where Hemingway claimed to be poor and happy, the narrator is poor and unhappy. But he learns to write, completing an experimental novel called The Lettered Assassin that kills its reader when they finish the book.

The result is an engaging, ironic, and at times outright funny examination of the process of learning to write. As a piece of intertext, Never Any End to Paris is a brilliant inversion of and commentary on A Moveable Feast that simultaneously lavishes praise on and deconstructs Hemingway’s customary surety.

My sole qualm with Never Any End to Paris is that it is too erudite for me. I loved the intertext with Hemingway and the discussion of writing, but most of the literary references to the people the narrator meets in Paris were new to me. I came away with deep appreciation for for the first two threads of the novel, but the third, a literary portrait of Paris in the 1970s, went over my head.

I also finished American Prometheus, a biography of Robert Oppenheimer, earlier this month, and last night started R.F. Kuang’s fantasy novel The Poppy War, which I’ve been looking forward to reading for about a year. Kuang is a very young author and is working on a graduate degree on modern Chinese history. Both facts clearly inform the book in the early going. I’ve only read the first chapter, which feels a little bit like heroic wish-fulfillment that is common in the fantasy genre, but the setting has me wanting to read on.

One thought on “Never Any End to Paris”

That feeling when you really just want another ten minutes of sleep.
Okay, you caught me. I went through the NY Times’ notable books of 2020 last week and picked up from the library anything that looked interesting from the library. The result is that my reading selection has trended more recent than usual of late.
Tonight’s sky.
What is this cat? This is him *sleeping* under my desk.
Hello. I am a turtle.
When a Muslim woman in India expresses dissatisfaction with state brutality and police incompetence after a terrorist attack on a commuter train, she finds herself accused of committing the attack. On the outside the prison, a hijra (a trans woman) might prove the key to her freedom and her former teacher stakes his place with a far-right party on proving her guilt.