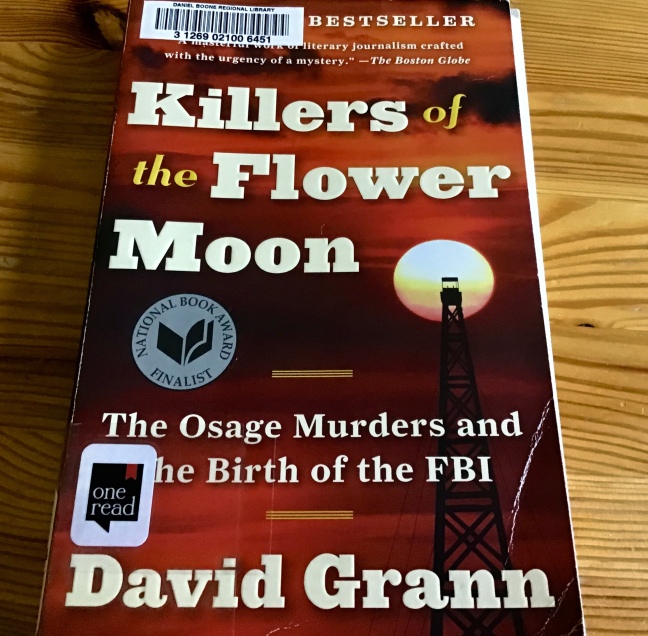 Among the many injustices committed against Native Americans in the 1800s was forced removal. By government mandate, tribes from across the eastern United States moved from their homelands to Oklahoma, which was then considered unproductive land. Among these tribes were the Osage, whose land after the relocation and a series of additional thefts was unproductive even by the standards of Indian territory. At least until their land became the center of Oklahoma’s first major oil rush.

Almost overnight the Osage became, per capita, the wealthiest people in the world. But in the eyes of the federal government, the Osage were incapable of managing their money without the approval of white guardians.

In the 1920s, crisis struck Osage county. Members of the tribe began to die under mysterious circumstances. One was shot, others appeared to have been poisoned. Several white citizens of Osage County tried to help the tribe members, even at the risk of their own lives, but white law enforcement officials, under the guidance of William Hale, a white man dubbed King of the Osage Hills, chalked the deaths up to coincidence and closed the case.

But the official story did not sit well with family members of the deceased and the deaths began to make national news.

At a time when law enforcement was intensely local and often deeply corrupt, this case, with its notoriety and Native American connections, came before J. Edgar Hoover and the nascent Federal Bureau of Investigation. Hoover passed the case to Tom White, an old-style agent, former Texas Ranger, and the antithesis of Hoover’s dream of an agency filled with college-educated bureaucrats. Nevertheless, White was exactly what Hoover needed in Oklahoma.

In Killers of the Flower Moon, David Grann reconstructs White’s investigation, showing how he broke through a conspiracy among the local white community members to kill off the Osage and funnel their financial claims toward Mollie Burkhart and her children with Ernest Burkhart––William Hale’s nephew.

Killers of the Flower Moon is a pop-history that reads like detective novel, and with good reason. It is at its heart true crime, sitting at the intersection of unrestrained capitalism, the wild west, and the difficult relationship between the United States and Native American tribes. As befits his status as a New Yorker staff writer, Grann is most successful at bringing both the conspiracy and the investigation to life. The story imbues names and details to a long history of exploitation and violence, here with private citizens using local institutions to exploit the situation.

However chilling the story was, though, it does not substantially change my opinion about either the treatment of Native Americans or the unchecked capitalism of the early twentieth century. Grann only sketches the backdrop of genocide (and attempted genocide) against Native Americans during this period and otherwise allows the specific case to stand in for much more widespread wrongs.

(Contrast this decision with The Real All-Americans, which is equally easy to read, but its focus on the development of Carlisle Indian School football gives Sally Jenkins a platform to talk more about cultural erasure.)

Something similar happens in the final section of the book where Grann pulls back from sketching the future lives of the principal actors, pivoting to a journalistic narrative of his research and the lingering memory of the case in Osage County. It feels like an epilogue, but falls flat in terms of lasting significance. The meaty issues that prompted and enabled the conspiracy disappear back into the scenery, leaving only the sad, but ultimately insubstantial, memory of an explosive event.

Killers of the Flower Moon was the 2018 Columbia (Mo.) One-Read, and for good reason. Grann gives the reader a lot to chew on and the tone and topic both create a perfect entry-point for students, reading groups, or anyone else who wants to learn a little something about the brutal history of the treatment of Native Americans. Just don’t stop here.

Next up, I finished Tana French’s The Trespasser, an utterly engaging installment of her Dublin Murder Squad series, and have since begun Robin Hobb’s Mad Ship.

One thought on “Killers of the Flower Moon: The Osage Murders and the Birth of the FBI”

Red wine velvet cupcakes (dairy free), with a French vanilla (dairy free) buttercream.
Good morning, (chocolate) babka.
My latest attempt at sourdough bagels. This was an adaptation of the recipe found in Bread Baker’s Apprentice, at 1/4 scale, and with starter coming off a feeding with whole wheat and bread flour.
I ordered some books that I had been waiting on, but one of the packages contained a book I didn’t order…because I had written it.
It has been a little while since I’ve done this one of these reading roundups. Probably because I’m reading more on Kindle and the covers are meh.
Post-trip photo dump.