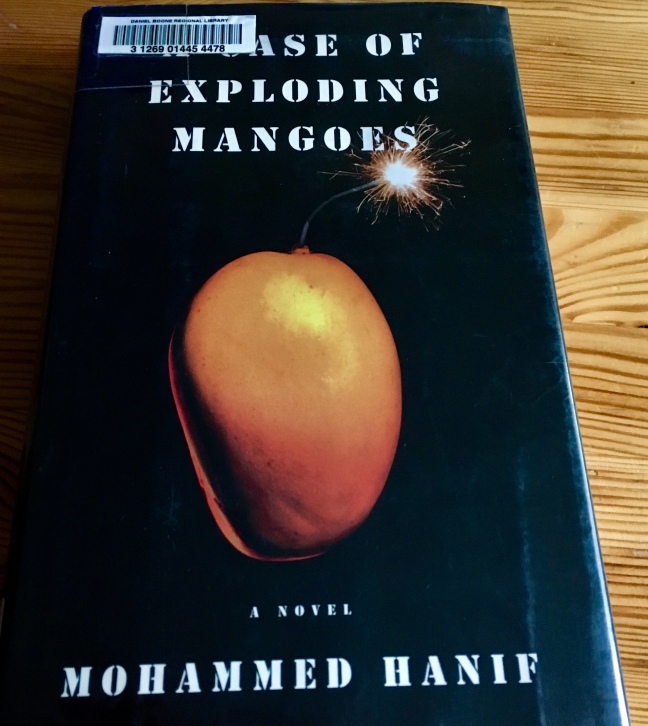 A plane crash near Bahawalpur in 1988 killed Mohammed Zia-ul-Haq, the president of Pakistan who had come to power a decade earlier by way of military coup, several top aids, and the American Ambassador to Pakistan. The official inquiry concluded that the plane was sabotaged, with fingers pointed toward India and other foreign agents, including the United States, and members of Pakistani intelligence suspected of conspiracy.

Mohammed Hanif’s A Case of Exploding Mangoes turns the circumstances of Zia’s death into a farce in the mode of Joseph Heller’s Catch-22.

The bulk of the narrative unfolds in alternating narratives that are doomed to collide. The first follows Junior Under Officer Ali Shigri, son of a recently-deceased war hero, commander of the academy’s silent drill squad, and a man in a pickle because his roommate Obaid has disappeared without leave. Ali Shigri finds himself first interrogated and then under arrest, allegedly because he was a co-conspirator in whatever Obaid was plotting, however he may protest.

In truth, though, Shigri’s suspicions about the death of his father have led him into the tangled nest of snakes that surrounds the president. Wherever he is, whether in the training academy, imprisoned beneath the Mughal fort in Lahore, or being interrogated by the intelligence services, Shigri looks to enlist allies to carry out his vendetta.

The second arc follows President Zia in his last days, largely holed up in in the Army House, pandered to by fearful soldiers and entirely isolated from the citizens who he is convinced love him. Zia, as Hanif characterizes him, was an imposing figure: a powerful general guided by his religious faith who, in the years after the coup that brought him to power, left a lasting Islamic imprint on the country and firmly believed that he deserved the Nobel Peace Prize for his role in defeating the Soviet army in Afghanistan.

But in 1988 Zia is pathetic. His chief advisors condescend to his demands for prayer in his presence and then plot for their own power over whiskey and even his wife is about ready to kick him out of his bed. Making matters worse, Zia is beset by worms that are tearing him apart from the inside. At least his people love him, he thinks.

There are easy––perhaps too easy––parallels between A Case of Exploding Mangoes and Joseph Heller’s classic World War Two novel, Catch-22. Both are military farces with a motley cast that trade on the absurd, but Hanif falls short of the high standard Heller set.

A Case of Exploding Mangoes does its best to speak truth to power, and in small ways offers a critique of Zia’s Pakistan. Shigri’s prison conspirators are a communist organizer trying to improve the plight of the working class, only to have been arrested, tortured and thrown into absolute blackness where he was forgotten for seven years and a blind women condemned to death for fornication after having been raped. In both cases Hanif is critical of these brutal and arbitrary punishments, but the hopelessness of both situations is only heightened because the only people with any agency are the soldiers.

In this sense, the most successful part of the novel was the portrait of Zia because it demonstrated the fundamental futility of the structures that he created. This arc also contained the funniest situations, including a memorable parachute jump and Osama bin Laden (OBL) showing up at a cocktail party. (During these sections of the novel I frequently recalled Ghost Wars, an account of the US involvement in Afghanistan in the 1980s and 1990s.)

By contrast, the main plot of A Case of Exploding Mangoes is an intermittently successful revenge fantasy that shrugs off any possibility of change.

Taking up the Catch-22 parallel, that novel is an absurdist critique of war and military bureaucracy from the perspective of self-preservation near the end of what is sometimes called “the last good war.” Self-preservation is easy to connect with and (military) bureaucracy is an ever-ripe subject for mockery, but the ancillary factors soften the totality of the war setting.

A Case of Exploding Mangoes is set apart from an actual war, but, published in 2008, is set to remind the reader of a post-9/11 world of constant warfare with no end in sight. Revenge is a fine motivation with a long literary history and it is admirable to poke at insular military governments like that of Zia or closer in time to the book’s publication, that of Pervez Musharraf. And yet, the fact that Hanif successfully takes aim at the larger social failings of Zia’s regime made the driving engine of the plot, the revenge plot, fall flat.

I am between books for a moment, having just finished Anand Giridharadas’ Winners Take All: The Elite Charade of Changing the World.

My first attempt at sourdough scones, from my newest bread book, The Perfect Loaf.
This year for my birthday I’m putting all my skill points into “Pizza” (not Profession: Pizzaiolo, mind you).
Red wine velvet cupcakes (dairy free), with a French vanilla (dairy free) buttercream.
Good morning, (chocolate) babka.
My latest attempt at sourdough bagels. This was an adaptation of the recipe found in Bread Baker’s Apprentice, at 1/4 scale, and with starter coming off a feeding with whole wheat and bread flour.
I ordered some books that I had been waiting on, but one of the packages contained a book I didn’t order…because I had written it.