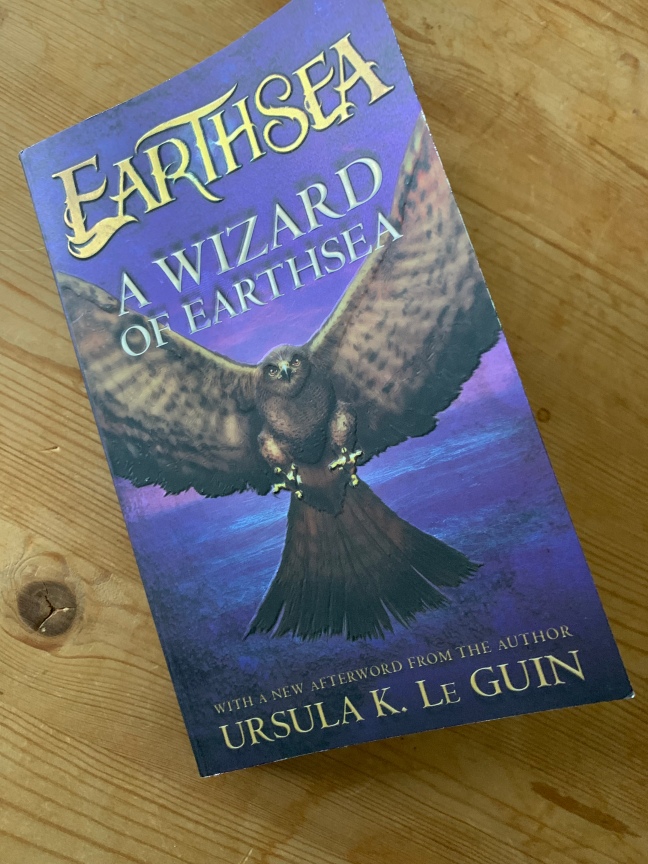 Coming to Ursula K. Le Guin’s novels as a mature reader, I started with her mature works The Dispossessed and The Left Hand of Darkness. These novels are philosophical and profound, part of her allegorical Hainish Cycle. By contrast, I put off reading A Wizard of Earthsea because it is simple, a book for a younger audience.

Sparrowhawk (real name: Ged) is a promising young mage from Gont, an island in the archipelago on Earthsea with a reputation for giving birth to powerful mages. As a child he manages to repel a Kargish raid on his village and is subsequently taken in by the Mage Ogion. The novel is, in effect, a chronicle of Sparrowhawk’s early exploits where he demonstrates his power by binding the powerful dragon Yevaud to Pendor and achieves his first great triumph: defeating a shadow that he himself summoned into the world.

In short, this is a classic Bildungsroman for a young wizard. I have found myself increasingly bored by stories about preternaturally talented young men and this concern lingered the entire time I was reading this book that is clearly written for younger readers.

But to dismiss A Wizard of Earthsea as shallow or rote is to give Le Guin too little credit. As she notes in the Afterword, this is a story about a person of color who is betrayed by light-skinned characters. He is explicitly a good and well-intentioned person with a positive male friendship, and is his own enemy. This is story without overt militarism or wars that define the fantasy genre from the Arthurian models through Tolkien and beyond.

War as a moral metaphor is limited, limiting, and dangerous. By reducing the choices of action to “a war against” whatever-it-is, you divide the war Me or Us (good) and Them or It (bad) and reduce the ethical complexity and moral richness of our life to Yes/No, On/Off. This is puerile, misleading, and degrading. In stories, it evades any solution but violence and offers the reader mere infantile reassurance. All too often the heroes of such fantasies behave exactly as the villains do, acting with mindless violence, but the hero is on the “right” side and therefore will win. Right makes might.

If war is the only game going, yes. Might makes right. Which is why I don’t play war games.

A Wizard of Earthsea came out in 1968, far before the start of the recent golden age of fantasy literature. The best that the modern genre has to offer (e.g. N.K. Jemisin’s The Fifth Season) offer more complex plots and more fully developed characters, but this just makes it easier to underestimate her achievement. Even today, too many fantasy novels default to a faux-Medieval Europe setting and feature heroes whose “best” skill is their ability to end lives. Wrestling with the morality of this skill may be a common feature in recent novels, but there remains a residual attraction to sword-wielding prodigies.

I remain in awe of Le Guin, whose keen insight imbues this attractive mid-grade novel with subtle depth. Still, I was not the primary audience for this book and had difficulty connecting with the characters because of the tendency to narrate at a remove rather than embedding the reader in their points of view––something that heightens the superficial resemblance to Arthurian Romance.

All of this to say: I am glad to have finally read A Wizard of Earthsea, but I’m not sure that I will read on in the series.

I am about a third of the way through a history of the Greek War of Independence that broke out in 1820. The book has turned into a bit of a slog. The most interesting thing, though, is exploring the difficulties of creating a nation at a time when seemingly the only people who conceived of “Greece” were educated people from Western Europe who visited the region with their eyes filled with visions of the distant past and a society of ex-pat merchants and soldiers of fortune.

One thought on “A Wizard of Earthsea”

Red wine velvet cupcakes (dairy free), with a French vanilla (dairy free) buttercream.
Good morning, (chocolate) babka.
My latest attempt at sourdough bagels. This was an adaptation of the recipe found in Bread Baker’s Apprentice, at 1/4 scale, and with starter coming off a feeding with whole wheat and bread flour.
I ordered some books that I had been waiting on, but one of the packages contained a book I didn’t order…because I had written it.
It has been a little while since I’ve done this one of these reading roundups. Probably because I’m reading more on Kindle and the covers are meh.
Post-trip photo dump.