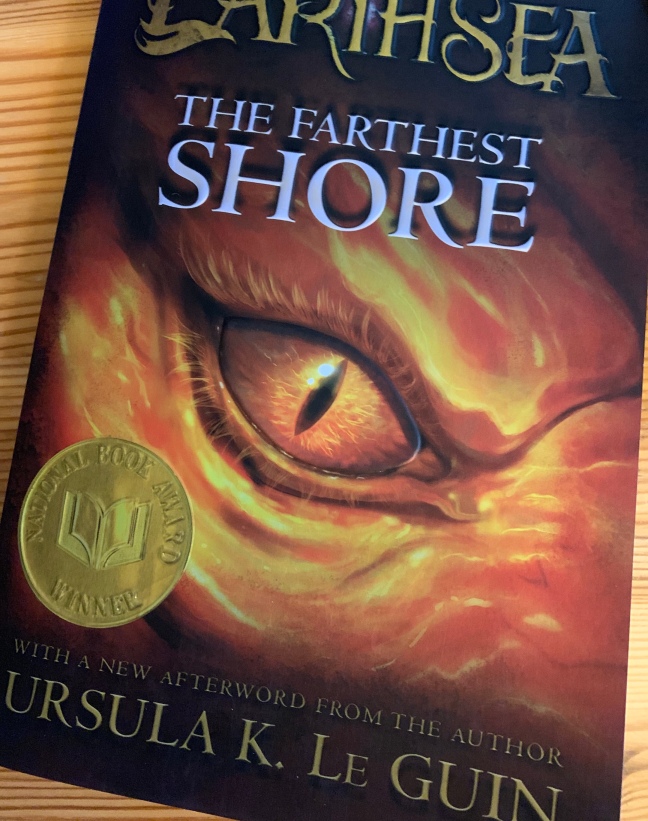 “The traitor, the self; the self that cries I want to live; let the world burn so long as I can live! The little traitor soul in us, in the dark, like the worm in the apple. He talks to all of us. But only some understand him. The wizards and the sorcerers. The singers; the makers. And the heroes, the ones who seek to be themselves. To be one’s self is a rare thing, and a great one. To be one’s self forever: is that not better still.

Decades after the events of The Tombs of Atuan, Prince Arren of Enlad has arrived on Roke, the island of the Wizards, with dire news: magic is disappearing from the world. Signs of this impending doom haven’t reach Roke yet, but the Archmage Sparrowhawk (Ged) who watches the balance of the world decides to trust Arren and venture out into the world to see what is happening.

They go first to the Southern Reaches where magic has indeed vanished, and with it most restraints of social connection. The disappearance of magic from the world of Earthsea so disrupts the fabric of society that it begins to unravel as people turn to drugs to cope. People alternate between despair and succumbing to a destructive, addictive promise of oblivion where they are being told that they can find eternal life. The mage and his guardian then head west, encountering the people of the open ocean who live on rafts where the magic of the song is also vanishing, before heading past the islands of dragons and to Selidor where they have to cross over into the land of the dead to find the source of this darkness.

The best thing about Le Guin’s Earthsea novels is her oblique and nuanced approach to themes. Where most fantasy literature relies on supernatural or eternal evil, these novels have grand stakes through intimate stories. A Wizard of Earthsea tackled taking rash actions and overcoming an internal darkness. The Tombs of Atuan took on issues of gender, power, and uncritical belief. The Farthest Shore is no different. Here she tackles the banality of human evil and, ultimately, the ordinariness of heroism when individuals have the courage to take action even at a cost to themselves––regardless of whether the person is young Arren or Ged, the most powerful mage alive.

The themes in The Farthest Shore turn it into a thoughtful meditation on good and evil, but it was my least favorite of the first three Earthsea novels. As usual, Le Guin’s new afterword is an engaging read, here focusing on dragons, the human face of evil, and why the novels seem to skip forward in time at irregular intervals. Contrasted with the first two books, though, I found the plot and most of the character development got lost for the meditation on good and evil. I had this same problem to an extent with A Wizard of Earthsea, but the fact that it was also a story about Ged’s coming of age, character came to the fore.

Here, we get a glimpse of Ged at the height of his powers, something we know because he have heard the tales about his deeds even when we haven’t seen them, but much of the story hinges on Arren, who Ged mostly takes under his wing. So far this isn’t a problem, and Arren even has his moments, but then he is revealed to be the descendant of Morred, one of the good kings of old and therefore a candidate to take up the Ring of Erreth-Akbe and justly rule the land. Where The Tombs of Atuan revealed “reincarnation” to be the work of a dangerous cult and A Wizard of Earthsea showed the nobody Ged to be a hero because of how he used his prodigious gifts, The Farthest Shore offered us an entitled heir if only he has the courage to claim it. For me this undercut much of Le Guin’s otherwise incisive story.

The fourth book in the series, Tehanu, won the Locus and Nebula awards for best fantasy novel in 1991, so I am looking forward to reading it despite my issues with The Farthest Shore.

Next up, I just finished Christopher Chabris and Daniel Simons’ The Invisible Gorilla and other ways our intuitions deceive us, pop-science book about the psychology of intuition. I haven’t decided what to start next. I have a copy of Tehanu, but may need to read Beloved first, in light of Toni Morrison’s passing.

If fear is the mind-killer, then one of these two is all mind, the other no mind.
It has been soup weather the last few days. First stab at broccoli cheese went well. With a fresh sourdough for dipping.
Tested a new cookie recipe today. Chocolate cookies made with spelt, chocolate chunks, cocoa nibs, freeze-dried raspberries, and a dash of cayenne.
More recent reads.
…why is my cat wearing her collar like a tiara?
A bit of a mess, as Paul Hollywood might say, but they taste good! Mini raspberry palmiers, baked this morning. I have a whole slew of things I can do to make them neater next time and clearly have some work to do on my puff pastry.