I haven’t done one of these in a while, so….following the model of NPR’s Pop Culture Happy Hour and its final segment, I am using some of these posts as a reminder to myself that there are things that bring me joy and as a means of posting recommendations of things–usually artistic or cultural, sometimes culinary–that are worth consuming.

I have always loved maps. I loved maps so much in middle school that girls teased me about how I would “read” atlases. (The fact that it was girls doing this is not important, but it amuses me in hindsight.) I am an absolute sucker for all sorts of maps, whether fictional or actual, old or new. A good map is essential to my love of fantasy series, even if many of those maps are provocatively incomplete and I have a deep and abiding love of geological histories of fantasy series. In another set of circumstances, I easily could see myself having been a cartographer or geographer.

All of that is by way of preface. This week I found a twitter account @UnchartedAtlas that sends out a tweet every hour with a new, randomly generated fantasy map. There is also a website that explains the method for generating the maps and lets you play with the tools. This is because these maps start with a random point generator that then connects them in a rough outline, adds terrain and rivers, erodes that terrain based on earth-like geology, and then populates it with cities based on a set of criteria. A paired code generates the names.

Certainly not every factor is accounted for, particularly in terms of city placement, but the maps represent a fascinating blend of criteria derived from historical geology and derived from the predilections of fantasy authors. I’ve been loving the map updates and the processes of creation, both, and thinking about what lies beyond the text of the maps. The inner map geek in me is like a kid in a candy store with this site.

Below are a few of my favorite maps from recent updates. 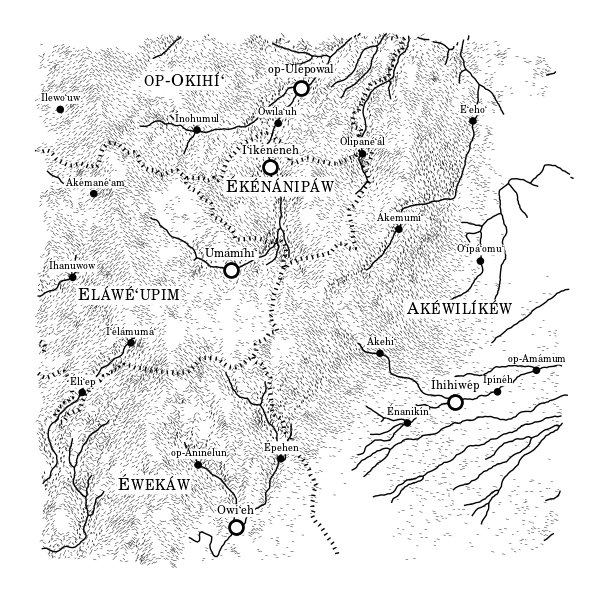 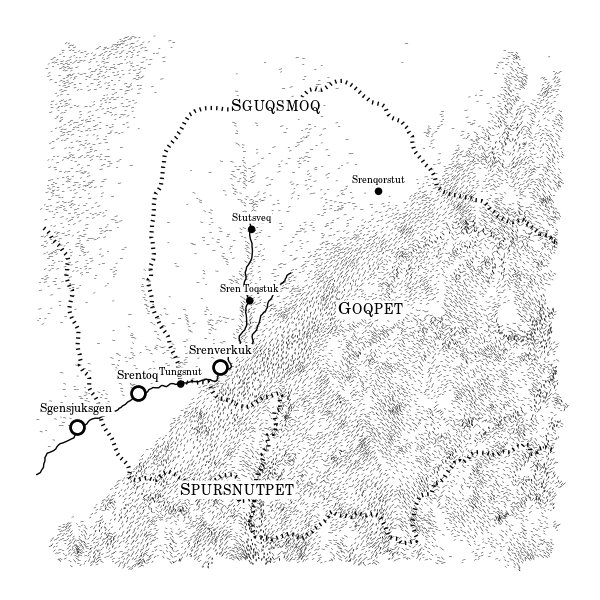 I have always loved maps. In fact, I had a pocket atlas of the world in middle school and was teased for “reading” it. But in a European tradition, maps are seductive, deceptive. They instill a sense of order and possession in the world that bear not resemblance to reality. Sure, sometimes the line is a simulacrum of a wall or a road or a river or a mountain, but in many instances that is an artificial creation; where the line is not man-made, it is wont to move,such as when a river changes course.[1]

There are other issues with maps, too. One West Wing episode features a petition from a group called Cartographers for social equality–a group dedicated to flipping the usual N-S paradigm because having north on top creates top-bottom attitudes. Likewise, the central panel of a map centralizes that landmass–usually the United States or Europe–in the viewer’s awareness. Then there are claims to ownership that the cartographer inscribes on the map, which gets us back to the issue of lines. The common practice in Ancient Greece was to place boundary markers (horoi) to denote borders of property (particularly rented or mortgaged property) and temple land.[2] Similar stones could denote the boundary of the chora that belonged to the town. There may also have been border watch posts or border forts along or near that border that would have extended a more physical presence along the border. Within the territory there was ownership of property, but on a state level the possession of territory was more about what the state could claim as its own and subsequently protect than any sort of “ownership” in the modern sense.

Lines that appear on maps showing the extent of territory in the ancient world are often problematic, but so too is replacing the lines with nodes. The key here is a multiplicity of forms of territory. Each city in Greece would have possessed its own chora, but the furthest border was rarely a line, even if there was a border of boundary stones. Control and borders of empires are even more problematic. We can drawn an outline of Alexander’s conquests, but in the furthest reaches of Bactria and in central India, those lines would have been meaningless. Territory was only possessed if it could be controlled–lines were only real if they had physical manifestations. This necessity led to an emphasis on urbanization by ancient state buildings (Seleucus and Antigonus among the successors to Alexander’s empire being classic examples). Sedentary peoples were easier to control than nomads and cities, or fortresses in some instances, offered a physical presence in the area. The Seleucid kingdom eventually reached a point where it was consisted of cities along the royal road, with each city having its own chora.

I wrote before that these fissures and cracks in the ancient world and how we think about it are where I see some ancient relevance to the modern world. Recently there have been some reports about the escalation of violence in Syria and Iraq and how the US withdrawal from Iraq has allowed “terrorist” groups to form actual camps without fear of airstrikes. In a radio story (apologies, I forget which NPR program this was on), the host asked the expert to clarify whether the camps were in Syria or Iraq and was told that the people involved did not recognize a border in the region. The United States and Western Europe are committed to a nation-state paradigm and territorial integrity for their own reasons, which is why there has been only a passing discussion of breaking up Iraq and Syria,[3] but it is easy to forget that the borders only exist in as much as there is collective agreement and are enforced. The jigsaw puzzle of the world map offers certainty and completion in the world and in some parts of the world that paradigm works, but in any number of other places the borders are just as illusory as the concept of the state that the borders are supposed to demarcate.

[1]The root of the English word “meander,” for instance, is the Maeandros River in Anatolia, a waterway notorious for wandering around the valley.

[2]The word also denotes other borders or memorials.

[3]If the United States was to support separatist movements without widespread international support (such as from the UN), then there would be precedent for other nations to support Hawaii in its separatist bid. Most nations have groups that would rather be independent, so unless there is a compelling reason (e.g. ethnic cleansing) for the region to be independent, there is a dearth of support for such groups on the international level.

Hello.
Naked and fully dressed. Tried a different pizza recipe (Romana) from Marc Vetri’s Mastering Pizza. The crust is super light and soft and flat.
Nim is unimpressed by Sasanian history.
Second attempt at pizza al taglio, this time half tomato, mozzarella, olive, half potato.
Monday morning is the best time for fresh baked goods because who doesn’t want tasty things to off the week? Fortunately muffins only take half an hour or so.
I was inspired by watching a documentary about Gabriele Bonci and so decided to try my hand at a Pizza Al Taglio style (this makes four discrete styles I make), which bakes a very high hydration dough for roughly 20 minutes in a sheet pan.